I recently put together a nice little system for ceremonies this year with all new gear.  The goal was true wireless—meaning wireless transmission to a battery powered speaker so I could put the speaker anywhere. What I wanted to be able to do is set up my work station wherever I had access to power — as far away as that may be, so both my reception and transmission needed to be optimized for long range performance. [That said, I recently verified, I can run my rack from an Omnicharge power bank for several hours, so even that’s not totally necessary].

The other goal was being able to set up and break down in only 3-5 minutes. For many weddings, ceremony spaces overlap somewhat with cocktail hour spaces, which means that unless I can quickly break down and hand carry everything, I’m waiting until dinner or maybe even after the entire event to break down my ceremony system.

Here’s what I ended up with (started out with): 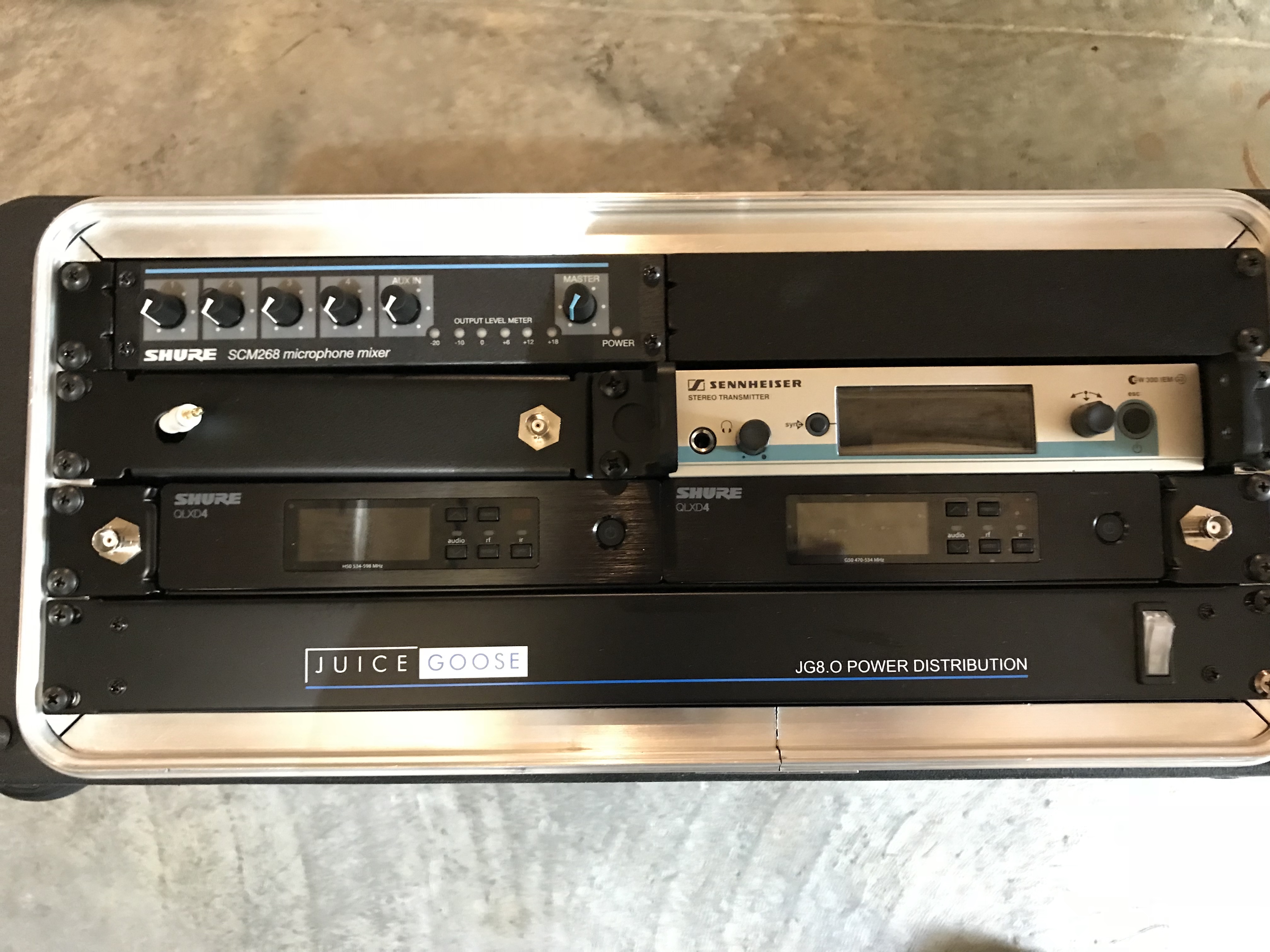 It’s an elegant little solution with 2 channels of QLX-D wireless for both a lapel mic and a handheld on a stand, a Sennheiser G3 IEM Transmitter to send the signal wirelessly, and Shure’s little half rack 4 channel microphone mixer.

I use standard passive LPDA’s (“shark fins”) for reception and the PWS domed helical antenna for transmission. Explanations are everywhere, but particularly for mobile DJ type work where our antennas are within a few yards of us, active antennas are generally going to do more harm than good.

I was generally pretty happy with it, but after a few gigs my major concern was the QLX-D wireless. Don’t get me wrong—I’m a HUGE fan of QLX-D and at the ~$1000 per unit price point, I don’t think you can beat it.  Even after switching back to UHF-R for ceremonies (spoiler alert), I’m keeping my QLX-D wireless toast mic for receptions.  It’s a GREAT piece of gear.

But more specifically, my concern was the passive splitters I used to feed the Shure QLXD receivers. Because Shure does not make a dual-receiver QLXD unit, I had to either 1) buy a new rack AND a 4-way active splitter which I’d only be using “half” of (approaching $1000 all in … plus now I’ve got an extra unused rack and a wife that’s not happy with extra clutter) or 2) use a passive splitter system like Shure’s UA221.  Shure’s own wireless accessory wizard recommends using the passive splitters with anything less than 25 feet of coax cable between splitter and LPDA’s, so I decided to roll with that idea.

Still, [theoretically] the coax loss and splitter/insertion loss is enough to negate all of the 6db gain (though it doesn’t negate the off axis rejection — which would also be 6db weaker) of using a directional LPDA.  Essentially, after all the added pieces, what I ended up with is a zero gain antenna (though with some benefit of off axis rejection) — or put another way, and factoring in the antenna gain, I’ve turned my 10mw transmitters into a 2.5 milliwatt transmitter–which is potentially bad news for long range reception. On paper, I was only barely [in directionality only] better off than just plugging the included 1/2 wave antennas directly into the receiver and setting it on a table.

Unfortunately, it didn’t perform “in the wild” as well as I’d hoped. Recently at a gig, the RF signal showed some weakness at just ~75’ indoors. I never experienced any actual audio dropouts, but it’s amazing how much RF energy can be absorbed by the waterbags we call wedding guests. It wasn’t just a single event, either. The RF indicators on the receivers (particularly the body pack’s receiver) were anecdotally (but clearly) less stable than my older UHF-R system. The signal bars actually dropped all the way to zero a few times, though again I never actually lost audio.

The few events was enough to send me back to the drawing board for the rest of wedding season… and really, this is hardly a surprise with what is effectively a 2.5 milliwatt transmitter. I want to feel good about being 300-400’ away if that’s what it takes to set up under shelter and/or near power.

I tried to remember why I even replaced the UHF-R with the QLX-D, and really it boiled down to:

While it may be now discontinued as of mid-2018, I still don’t believe Shure has really replaced it in their lineup.  Certainly UHF-R is still no slouch and was for more than a decade THE standard in wireless for A-1 level events like Superbowls, Broadway theaters, etc. I even noticed recently that they actually use UHF-R handhelds on America’s Got Talent (so not only do you know what I do with my Friday nights now, you know that instead of watching the acts, I’m looking out for what microphones they use).

While Shure Axient – the new top tier system – is fantastic, I’m simply not going to spend $15,000 for 2 channels of wireless for wedding ceremonies. The benefits of UHF-R vs QLX-D/ULX-D are:

So I went “back” to UHF-R, but I still wasn’t satisfied that I had the perfect ceremony system just yet.  Two things were sticking in my craw:

So I needed to add a third receiver both for the additional channel and for redundancy/backup.  Luckily the UR4D+ receiver has “cascade” outputs, so as long as the receiver meets a few requirements, I could add it on without any extra antenna splitting gear:

I settled on the new Audio Technica 3000 series wireless because it offered all of the above, and the DE2 band matched my G1 UR4D perfectly (both tune to exactly 470-530Mhz).

So here’s the finished product:

I’m extremely pleased with the performance thus far.  Here’s a little video from a recent event where the benefits are especially great.